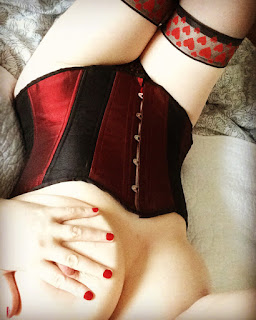 Image originally published as Nipplegasms and used with permission.

It had been a long drive, but over 400 miles later they had finally reached the hotel. Lila was so uncomfortable. She had wanted to surprise Sir with a delightful treat when they got to the hotel room, so she had put on her brand new corset and stockings under the clothes she wore to travel in. Sir had no idea what was about to be unveiled. After getting settled in he went to get ice for some drinks and she knew this was her chance. She stripped down to her lingerie and laid down on the bed. Lila started massaging her round, firm breasts getting them as perky as she could before Sir came back to the room.

When Sir came in Lila saw a look flash across his face. She knew that look. She was in for a long night as well. “Where did you get the corset, baby?”

“I bought it last week to surprise you.”

“Well, I don’t remember giving you permission for such a purchase, and I think there needs to be some punishment for that.” Sir said with a slight chuckle in his voice.

Lila knew he was just grasping at straws to come up with a reason to paddle her round ass. She could already see his hard cock growing under his jeans.

Sir reached into the bag full of toys for their weekend and pulled out a brand new paddle. Apparently, he had also made a purchase while preparing for their trip. Lila couldn’t wait to feel it’s thud against her ass. Sir sat down on the bed, placed the paddle beside him, and told Lila to bend over his knee. First she felt some nice hard smacks coming from his rough hands. The sting left behind a comforting warmth only a masochist could enjoy. Her pussy started getting wet from the first hit. Once Sir could feel the warmth coming from her ass he grabbed the paddle. With one swift thud Lila couldn’t hold back anymore. Her cunt was now dripping onto Sir’s leg. He could feel her shaking with the need to feel his cock buried inside of her.

“We are finished with the punishment. Now, how are you going to thank me?”  Lila got on her knees in front of Sir and started to undo his pants. She slid them off to find his cock at full attention, and she swore he had grown three sizes. She didn’t mind. She leaned in and took his hard cock fully into her mouth, deep into her throat. Sliding it up and down, using her tongue to massage Sir’s shaft. He was running his fingers through her hair, gripping and taking control of the speed. Then he pulled her head off he long hard cock.

Sir bent Lila over the bed and spread her legs. He shoved Lila’s head into the bed and proceeded to give Lila’s tight, wet cunt a beating. Sir’s cock going harder and deeper with every thrust. Sir reached up and grabbed Lila’s hair and pulled on it so hard that even her perfect tits came up off the bed. She was screaming from the pain and pleasure she was feeling. Lila was loving every minute. “Cum for me you little slut. Let me feel how much you like it all over my cock.” That was all it took. Lila came so hard her legs were quaking and turning to jello. She couldn’t hold herself up, but Sir was not letting up.

They laid down on the beautiful bed they had destroyed. Sir still playing with Lila’s firm tits. They snuggled and kissed until Lila fell asleep. Happy with the surprise she had given her Sir. Even if it did come with a “punishment”. 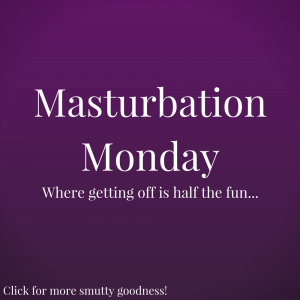