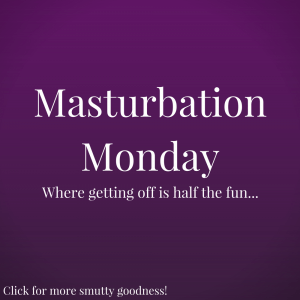 She made a decision. It’s not like he was going to find out anyway, right?

Sandy pulled out the toy box and found her favorite toy, her trusty rabbit. She knew it was cliche, but it worked and made her feel amazing. Sandy stripped down and got comfortable on the bed. The she slowly started sliding the toy inside while playing with her own oversized breasts. Pulling at her nipples as she slowly moved the fake cock in and out of her wet cunt. Eyes closed and imagining it was her Sir making her feel this way. She started moving it faster and turning up the intensity on the vibration when all of the sudden she felt a rough hand close around hers. Pulling the toy out in a way that matched his hands.

Sandy knew she had been caught wet handed. She didn’t even have to open her eyes to know who was standing over her. She slowly opened her eyes to an expression that simply said, “Explain yourself”.

When she was finished telling him how badly she needed it, and how sincerely sorry she was all he could say was “wall”. She knew what that meant, and she could see it in his eyes. The sadist in him was coming out to play, and the masochist in Sandy was more than ready. Sandy got up and proceeded to bend over, placing her hands on the wall to hold herself up during what she assumed was going to be a severe punishment. She wasn’t disappointed. The first smack woke up her pain loving side. With every hit she cried out in lust, pain, shame, and relief.

Sandy started to squirm. The first orgasm hit and she felt a wave of relief wash over her. It felt so good to have the release. Then when the vibrations didn’t stop she felt overwhelmed it was painful to have that happening again. She was forced to keep going. She couldn’t get her hands free to pull the damn thing out. She couldn’t wiggle her torso enough to get it out because Sir had made sure to tie that down to the bed as well. Instead she was forced to endure the feeling that was supposed to be so sweet that was now turning bitter very fast. Sir started playing with her nipples. Twistin and sucking on them. Making everything so much worse. Sandy came again, and again and again until she was spent. Tears running down her cheeks Sir finally took the toy out and untied her.

Sir held her close, kissed her tears away while rubbing her back. After rocking Sandy to sleep he laid her back on the bed and left the room. He was satisfied with her punishment now. He knew that he was not going to come home from work early to surprise her with an afternoon of uninterrupted play to find her playing solo ever again.